I contacted Patriots Point Naval & Maritime Museum about the status of the Clamagore; Below is the response from their Public Information Officer:

"The CLAMAGORE is still moored right here at the museum and is open for tours every day. We are currently researching options for her future. The cost of maintaining three 70 year old warships is extremely high. As of now, no plans have been made. No matter what decision is made, it must be approved by the U.S. Navy before anything can happen. We have, and are still open to proposals from other museums or towns inquiring about the possible transfer of the vessel. Thank you for asking."

TVA here: it's a response to this news story, among others:

MOUNT PLEASANT, S.C. (WCIV) -- Patriots Point officials say if there is not enough money to fix the U.S.S. Clamagore, they will look into turning it into a reef for divers and fishermen.

The non-profit is in need of $3 million for repairs.

Mac Burdette says the military artifact is deteriorating and needs to be fixed or moved as soon as possible. "The one thing, as the director of this agency, that I can not let happen is a repeat of what happened with the U.S.S. Laffey, where she almost sunk in our dock. We're not going to have a repeat of that,"said Burdette.

Burdette says Patriots Point will do all it can to make sure the U.S.S. Clamagore is well preserved.

"We want to be optimistic but, we also have to live in a realistic world here. It's a lot of money in particular with this economy right now. And we really hope it will be successful but we have to be prepared for the only other reasonable option if that doesn't work."
Top

The historic LST based in Evansville, Indiana, is underway to Pittsburgh:

The LST 325 ship is headed east on the Ohio River to Pittsburgh for its biggest moneymaking venture of the year.

The decommissioned World War II ship left its dock at Marina Pointe in Evansville Thursday afternoon. It will cruise the Ohio River 24 hours a day until it docks in Pittsburgh Tuesday. The 327-foot long vessel crawls across the water at an average of 10 mph. It takes the ship 24 hours to reach Louisville.

For a week, the ship will dock at Heinz Field, home of the Pittsburgh Steelers.

PERISCOPE: LST 325 heading to Pittsburgh
The LST visited Pittsburgh five years ago, said Chris Donahue, LST 325 board spokesman. The ship had 4,200 visitors a day on that weekend. A typical weekend for the ship in Evansville has 120 visitors.

Donahue said the ship’s annual trip is the top fundraiser for the museum.

“It’s a zoo,” he said. “It’s where we make most of the money that supports us, and keeps it a sailing museum.”

After a week in Pittsburgh, the ship will travel downriver to Cincinnati, where it will dock by Great American Ballpark, home of the Cincinnati Reds, for four days.
MORE AT LINK

RAZORBACK will have a Pearl Harbor survivor as a museum mate. And, like RAZORBACK, it was present at the surrender.:

The Hoga is a designated National Historic Landmark for its crew's firefighting and rescue efforts during Japan's World War II attack on Pearl Harbor on Dec. 7, 1941. The Hoga also pushed the heavily damaged Battleship Nevada away from the sea channel leading into the naval base, which prevented a significant portion of the U.S. fleet from being blocked in the Hawaii harbor.

Once at the Maritime Museum -- it's hoped by Dec. 7, Zonner said -- the Hoga will join the USS Razorback submarine, which was present at the official Japanese surrender in Tokyo Bay on Sept. 2, 1945.

"From our standpoint, we're really excited," Bob Major, executive director of the North Little Rock Convention and Visitors Bureau and a museum board member, said Thursday from an international tourism conference in Las Vegas. "People really don't realize the historic significance of having the Hoga here along with the USS Razorback."

Major said the effect on tourism and education and the opportunity to attract national military conventions and reunions would benefit all of central Arkansas by putting "more people into hotel rooms on both sides" of the Arkansas River. The museum is on the North Little Rock riverfront, just east of the Main Street Bridge that connects to Little Rock. 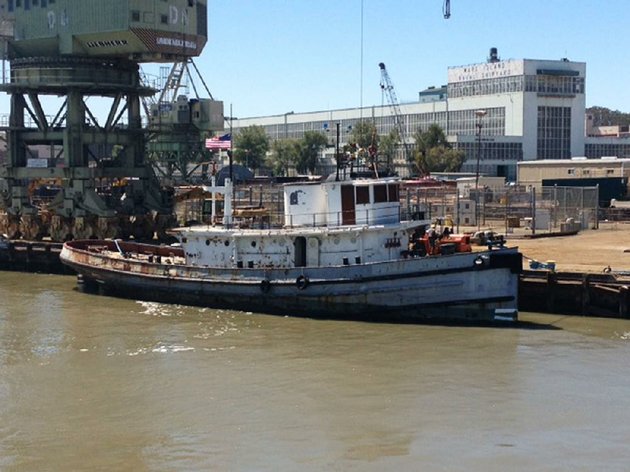 http://www.postandcourier.com/article/2 ... storic-sub
The historic submarine Clamagore, once slated to be towed from Patriots Point Naval and Maritime Museum and sunk off the coast of Florida, has been given a reprieve. Those who support keeping the Cold War-era submarine at the museum should seize the unexpected opportunity to rescue the vessel.

The Clamagore, one of three large vessels on display at the state museum in Mount Pleasant, was to have been taken off Florida’s shore and sunk as a diving attraction. But funding for the proposal fell through in Florida, and the Clamagore remains at its berth near the aircraft carrier Yorktown.
...
But it eliminated similar consideration for the Clamagore, which needs $6 million in repairs, according to the latest estimate from Patriots Point.

There has been a turnaround at the museum, both in an improved bottom line and in plans to use a portion of the museum property for resort development, and another nearby site as the Medal of Honor Museum.

But the Patriots Point board hasn’t changed its mind about getting rid of the Clamagore. Patriots Point director Mac Burdette says the options include donating the ship to another museum, sinking it offshore as a reef and scrapping it.

“We’re not going to be able to keep the submarine,” he said. Patriots Point officials are concerned that the sub could be swamped during a hurricane and sink at its berth.
Top

Two Marylanders have a reunion in Connecticut:

USS MISSOURI played host to a veteran who was there at the signing: Ray Morse [GREAT name for a sailor] who still fits in the uniform he wore that day:

[Note, he probably did not wear the tie as all who participated in the signing ceremony were told not to wear them in order that it appear to be just another day at the office and that we saw the surrender as inevitable, ho hum]

A GREAT way to keep up with naval history is the US Naval Institute's web log:

The US war material cargo of WWII times raised the Russian flag in Baltimore harbor on its way to Russia, honoring the history and nations fighting against Nazism.

BALTIMORE (Sputnik) — The US cargo ship John W. Brown that delivered war material to the Soviet Union during World War II, raised the Russian flag while moving through Baltimore harbor to a new location.
Members of the US —Russia Joint Commission on Prisoners of War and Missing in Action attended the event.

The John W. Brown, which celebrates its 72nd birthday on Saturday, is one of only two surviving Liberty ships in the United States. The other ship, Jeremiah O'Brien, is located in San Francisco, California.

"This ship was part of the largest ship-building program in the world," World War II veteran Joseph Colgan told Sputnik. "On the first trip, it made a long voyage all the way to Russia."

On her maiden voyage from October 1942 to March 1943, the John W. Brown carried two fighter planes, 20 tanks, trucks and cars for the Soviet Army that were delivered via the Caspian Sea.

Other US Liberty ships brought supplies to the Soviet Union's northern port of Murmansk through the Arctic Ocean.

On Nov. 18. 1983, a bone-chilling wind whipped down the Anacostia River. Wearing a thin raincoat, Master Chief Petty Officer James Mullen shivered on the deck of the Barry as tugboats pulled the decommissioned Navy destroyer through the open gate of the South Capitol Street swing bridge toward its final destination, the Washington Navy Yard.

Mullen had shepherded the ship from Philadelphia without incident until that night, when a gust of wind pushed one of the tugboats into a sandbar. The men on that boat dropped their rope before another boat was ready to take over, leaving the Barry to its own devices for a few nail-biting minutes.

“The wind was blowing hard and cold, and with no rudder and no propellers, the Barry was like a big sail,” Mullen, 76, recalls. “I nearly took out the South Capitol Street Bridge.”

Now, the D.C. government is replacing the bridge, also known as the Frederick Douglass Memorial Bridge, with a fixed-span bridge, trapping the Barry. So, the Navy decided to scrap the ship now, while it could still be towed away in one piece. The Barry’s formal departure ceremony will be Oct. 17, though it won’t be towed away until this winter, says Navy Yard spokesman Brian Sutton.

“We estimated that it was going to cost us around two million dollars if we were going to restore the ship to where it really needs to be,” Sutton says — hard to justify when “we only get about 10,000 visitors a year.”

Few argue with the logic of the decision, but the Barry’s departure is still unfortunate, former crewmembers and fans say. For three decades, the destroyer gave schoolchildren a window into the historic events it participated in, including the Cuban missile crisis and the Vietnam War. The beloved landmark also provided the Navy Yard with its last real link to the sea.
MORE AT LINK
Top

There is no regular admission fee charged for the special tour. Instead, a minimum donation of $50.00 per person (cash or check) ONLY, will be collected, to help ensure that the important cultural resources of this state will be here for future generations to enjoy. Please make checks payable to Battleship TEXAS Foundation. These tours are by reservation ONLY so please call EARLY.
Participants will be able to see areas of the ship rarely seen by the public. Featured highlights of the tours include the Ammo Handling Room, Compressor Room, Drying Room, Boiler Room, Main Radio Room, Main Battery Plot Room, Forward Dynamo Room, Forward Power Distribution Room, Central Station, # 1 Turret, and the Pilot House.

Participants need to bring a small pocket flashlight, wear comfortable clothes, rubber soled deck shoes, and a camera if you wish. Hard hats are provided, and water will be available along the tour route during breaks. A limited amount of tours are open to anyone 14 years of age and older by reservation only, at three different time slots beginning at 8:30 - 10:30am – and 1:00pm. Promptness is required, as start times are strictly observed.

The "hard hat" tours also have their own Facebook page:
https://www.facebook.com/battleshiptexashardhattour

Read about them here: 51 years ago today TORSK was in Squadron Six in Norfolk and the Beatles were in Baltimore at the Civic Center:

Ironically, both contributed to the fall of the Soviet Union, albeit, in different ways.
Top

Yup! I was on my way up to Maine to hang out with a bunch of VW TDI diesel geeks for the weekend and stopped in to see Dan and Ginger on the way.


TVA wrote:Two Marylanders have a reunion in Connecticut:

Maryland's Mallows Bay has been nominated to be a Marine Sanctuary:

One of the many abandoned hulks of Mallows Bay: